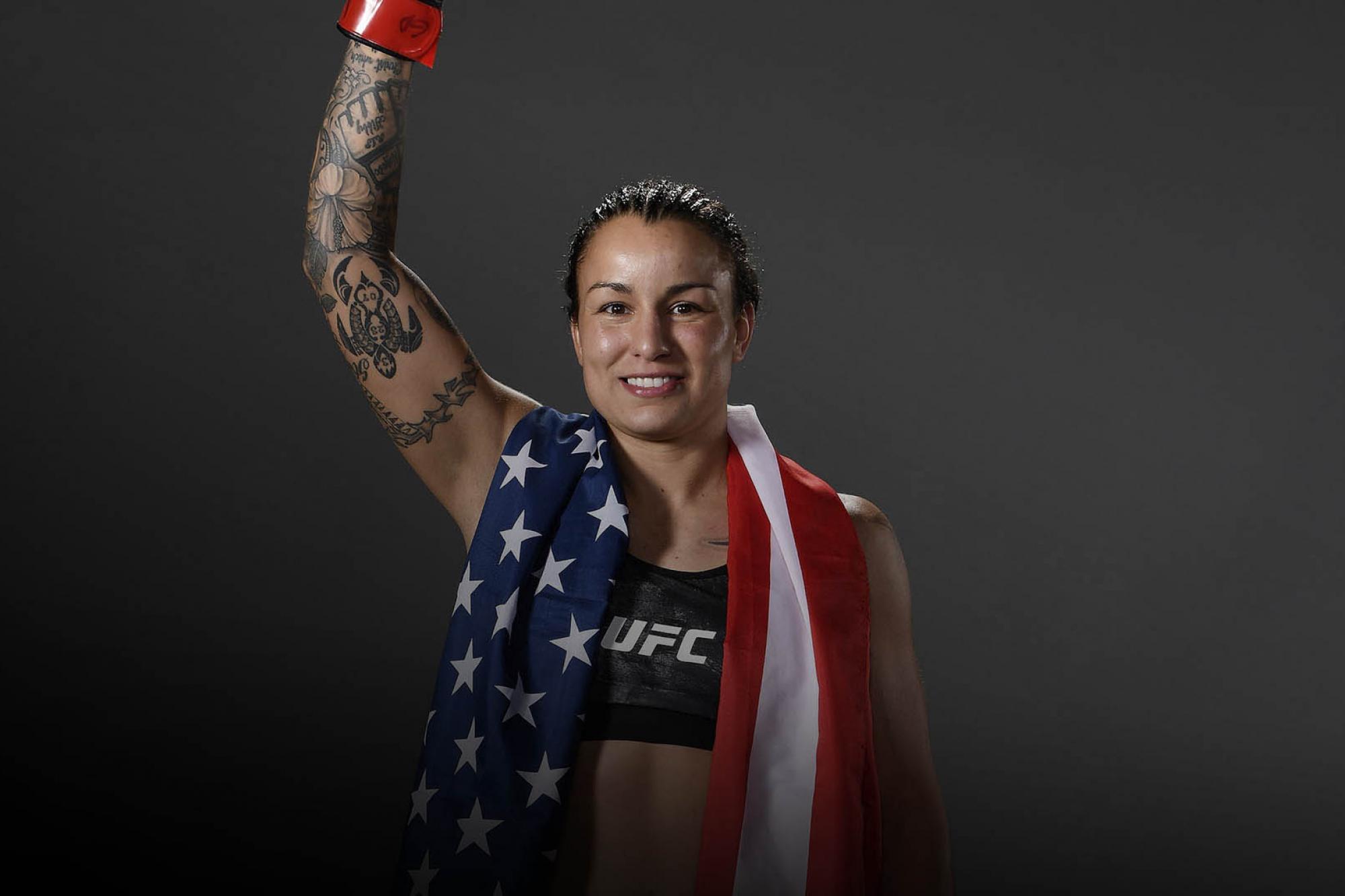 Pennington Has Rediscovered Her Passion

"Feeling like myself again — having fun that entire fight camp, rediscovering my passion, not having injuries, not trying to battle medical issues; it was a real turning point for me."
By E. Spencer Kyte, on Twitter @SpencerKyte • Jan. 14, 2020

“Let me tell you: I’m counting down to Saturday.”

Just days away from her long-awaited rematch with Holly Holm at UFC 246, Raquel Pennington sounds like a cross between a kid eagerly anticipating the arrival of Christmas morning and someone who knows a really big secret and can’t wait to share it with the world.

It’s not the standard vibe you become familiar with speaking to competitors anywhere from a couple days to a couple weeks out from a fight, where they’re happy with their preparation and confident in their skills, but aware that there are countless other variables that still have to be considered standing between them and victory.

It’s not that Pennington is dismissive of Holm, either, knowing full well that the former bantamweight champion enters off a loss, motivated to get back into the win column and silence the doubters who are questioning her future in the sport. They’ve shared the Octagon before, at UFC 184, with Holm landing on the happy side of a split decision verdict in her promotional debut, and nearly five years later, Pennington knows this weekend’s rematch is going to be even tougher.

“There is so much motivation behind this one,” she adds, the genuine anticipation apparent in her voice.

A big part of the reason for Pennington’s excitement is her split decision win over Irene Aldana in July, which may sound curious to anyone who watched the back-and-forth affair.

For 15 minutes, Pennington battled, trying to enforce her will on the taller, rangier Mexican fighter, who rebounded with a unanimous decision win in September and established herself as a bona fide contender thanks to a blistering first-round knockout win over the previously unbeaten Ketlen Vieira at UFC 245. When the final horn sounded, scorecards came in for both sides from the armchair judges at home, everyone acknowledging the closeness of the fight and that the verdict could go either way.

After establishing the drama and tension by announcing a 29-28 score on either side, Bruce Buffer read off the final 29-28 tally.

“… for your winner by split decision… Raquel “Rocky” Pennington!”

“July wasn’t my highlight performance, but for me, it was like winning the world championship because all the obstacles and adversities that I’ve been facing this entire time,” she said of her win over Aldana. “Bouncing back from those surgeries and a broken leg to a rough world title fight into developing hyperthyroidism and getting tested for thyroid cancer, then fighting Germaine, missing weight; there have been all these things that weighed on my heart and soul.

“Going out there and proving a point to myself, going out there and feeling like myself again — having fun that entire fight camp, rediscovering my passion, not having injuries, not trying to battle medical issues; it was a real turning point for me.

“That fight was everything,” added Pennington, who was sidelined for 18 months between her breakout win over Miesha Tate at UFC 205 and her bantamweight title fight with Amanda Nunes at UFC 224 as a result of multiple surgeries and an ATV accident that left her with a broken leg that doctors at one point feared they might have to amputate.

“We were standing in there waiting for the decision to be announced, my coach asked me, ‘Did you leave it all out here?’ He said, ‘Knowing you and the athlete that you are, I can answer that for you, but I want to hear what you have to say.’ I was like, ‘Heck no I didn’t leave it all out here, but the fact that I feel as good as I do, I know I’m back.’ That was a major turning point for me, for sure.”

She’s been propelled by that feeling ever since.

Just a couple weeks after facing Aldana, Pennington was contacted about fighting Holm for a second time, with the bout scheduled for UFC 243 at Marvel Stadium in Melbourne, Australia, the same venue where Holm dethroned Ronda Rousey. She immediately accepted, having longed to continue the “Revenge Tour” she planned out for herself following their initial meeting and into her win over Jessica Andrade at UFC 191.

After several weeks of training at home in Colorado, she and her team headed to Australia early, eager to get acclimated the time and weather changes. Less than an hour after they landed in Australia, it was announced that Holm had withdrawn from the fight.

“I’ve pretty much been in camp since May,” said Pennington, who did the tourist thing while in Australia, but got straight back into the gym after getting home. “I wanted to maintain throughout and continue progressing, getting better every day.

“Fighting Holly the first time was the fight that kind of re-lit the flame for me and I went on my winning streak (after that). Obviously I had to put my career on hold because I needed to have two major surgeries and that was a rough comeback and it seems like it’s been one thing after another since then. 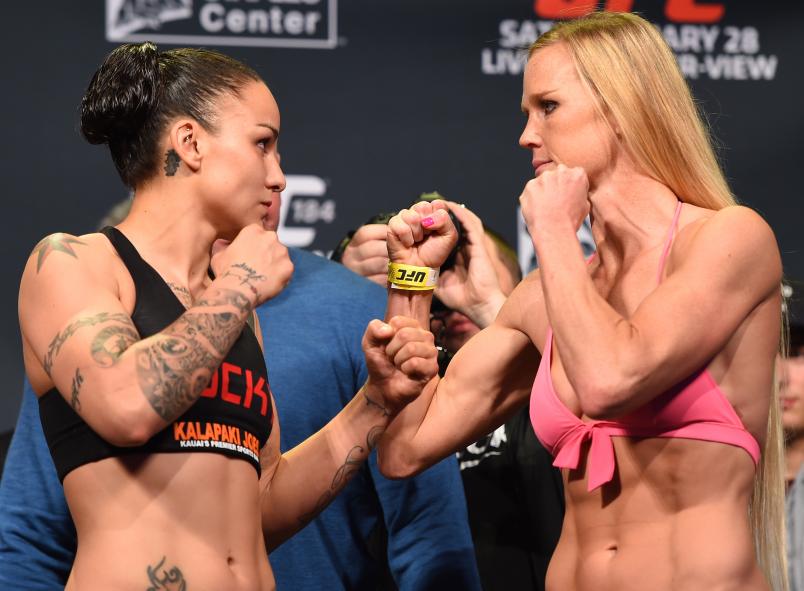 “So getting back to it, going in there and fighting that fight against Aldana — who is doing phenomenal right now; it’s not like it was a chump fight — it was a good fight to have back. I didn’t go out there and perform at my best, but I went out there and proved 1001 things to myself.”

Pennington is one of those competitors whose record doesn’t accurately reflect how good of a fighter she is and there is no space on her resume between her victory over Tate and her losses to Nunes and de Randamie that details the myriad challenges and issues she battled in the time between those bouts.

Though most fans are at least vaguely familiar with the fact that she went under the knife following her win at UFC 205 and that her title bout with Nunes had to be pushed back after she was injured, the true impact of a catastrophic injury like that and the physical, emotional, and mental toll it takes on a person is something you can’t fully comprehend unless you’ve been through it.

That’s why her performance against Aldana meant so much to her and how a narrow split decision win has turned into a catalyst for what she hopes is another run towards the top of the division.

“I don’t think people realize all the stuff that I was facing personally or everything we go through in general as athletes,” said Pennington. “It takes a lot to do this sport — mentally, physically, and emotionally — and for more than two years, I was down for the count and really struggling.

“(After getting that win), there is an extreme feeling of accomplishment and satisfaction. All those negative emotions I was feeling for so long — all that doubt, all that fear, all that frustration — has gone completely out the window.

“I’ve found my value and gratitude again. I’m genuinely happy and feeling like a freaking athlete again. I’m so excited for January 18.”

Although having her rematch with Holm postponed in October after she’d already finished her camp and made the long flight to Australia was frustrating, and rescheduling the bout for this weekend meant dialing back the holiday cheer, Pennington believes it has all been for the best.

“Having this opportunity to get back out there and put on a performance I know I’m capable of — the performance that most people have been waiting for me to put on — means the world to me,” she said. “I feel ready to conquer what’s in my future and to grab a hold of what I’m capable of; to go out there this weekend and let loose, be the Raquel that I am every day in the gym.

“Everything has a way of working out and now I’m 10 times more excited, 10 times more motivated and whether it’s pretty or ugly, nothing is stopping me from getting my hand raised.”

For more information and updates, sign up for the UFC Newsletter here.