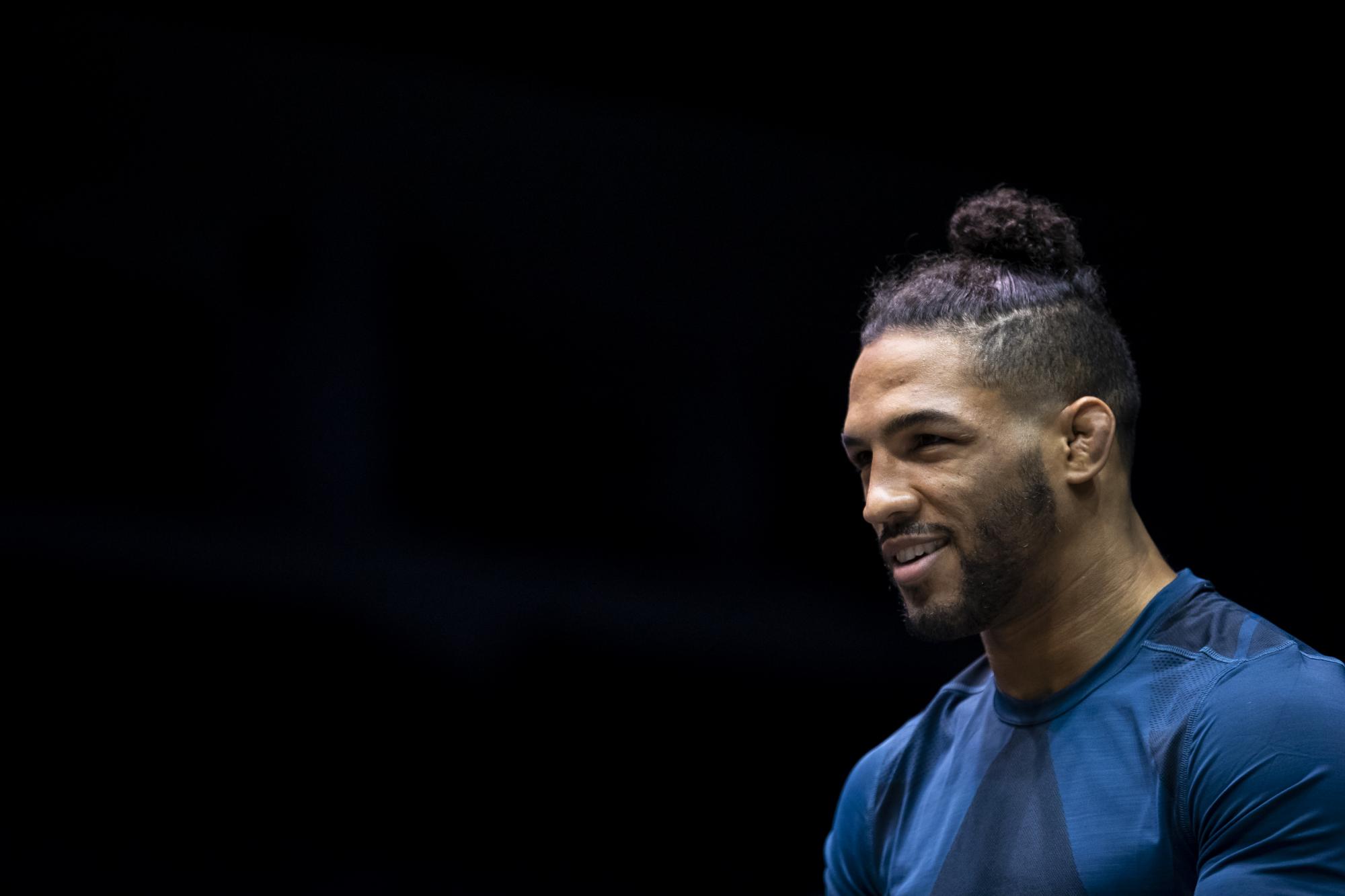 Kevin Lee Is Crafting His Next Chapter

A move up to welterweight has Kevin Lee in high spirits, and he's looking to make himself proud in Rochester.
By E. Spencer Kyte • May. 16, 2019

Kevin Lee has never been short on confidence.

From the time he arrived in the UFC as an unbeaten prospect and gave Al Iaquinta a serious run for his money in his debut, the 26-year-old has considered himself one of the top talents on the roster and capable of achieving great things inside the Octagon.

“You ain’t lying,” he said with a laugh when informed of the opening line of this piece. “I’m still the most confident guy that you’re ever going to meet.”

Throughout his UFC tenure, that unwavering self-belief has been both a blessing and a curse.

On one hand, it propelled the Detroit native to move across the country and train full-time, to seek out the greatest challenges possible and put together a 10-4 UFC record that has carried him into the Top 10 in the deepest, most competitive division in the sport.

On the other hand, it also led him to downplay the inherent danger that is present every time you step into the Octagon, resulting in more than a few performances he’s not completely happy with and a first-round knockout loss to Brazilian jiu-jitsu world champion Leonardo Santos that had him walking out of the cage before the decision was announced like Forrest Griffin back in the day.

“Some things you’ve just got to learn the hard way and that was definitely one that just had to be learned the hard way,” he said of taking Santos lightly in advance of their clash at UFC 194. “Now as I’m getting more into the game — and I really consider myself a veteran in these fights now — I appreciate that everybody is dangerous in their own right and they’re getting more and more and more dangerous as I’m moving forward.

“I don’t think anybody holds me to a higher standard than I hold myself to and it’s to the point where I’ve never really had a fight that I’ve been satisfied with yet, especially in the UFC,” added Lee, who collected five straight victories following the loss to Santos to earn an interim title fight against Tony Ferguson at UFC 216. “I haven’t really given that barnburner to myself and the fans, and that makes me constantly hungry because I know how much better I can do.”

But he expects that to change this weekend.

Venturing up to welterweight for the first time in his career, Lee squares off with former lightweight champion-turned-welterweight contender Rafael Dos Anjos in the main event of Saturday’s first-ever UFC card in Rochester, New York.

A long-time advocate for the introduction of a 165-pound weight class, Lee has always struggled to make the lightweight limit and missed the mark prior to his main event showdown with Edson Barboza last April in Atlantic City. While he made weight for his rematch with Iaquinta in December, it was another challenging cut, and when the UFC called with the opportunity to face Dos Anjos, Lee was quick to accept.

“Going up to welterweight is definitely a benefit,” he said, just a few days out from returning to the cage. “The way I’ve been feeling in this training camp — being able to push myself a little bit harder in training sessions, knowing that I can replenish myself at the end of the night, has been huge.

“I’m in a better mood and I feel better on a day-to-day, plus I can give 100 percent of my focus to Dos Anjos because I’m not having to fight the scale. It’s Wednesday and I’m not worried at all about the weigh-ins; I’m thinking solely about the fight — how it’s going to go and how it’s going to play out.”

More than not having to deal with a grueling weight cut, the chance to square off against a seasoned veteran like Dos Anjos, who enters the contest on a two-fight skid and is eager to get back in the win column himself, is what really piqued Lee’s interest.

Getting the chance to potentially jump the line in the welterweight title chase didn’t hurt, either. 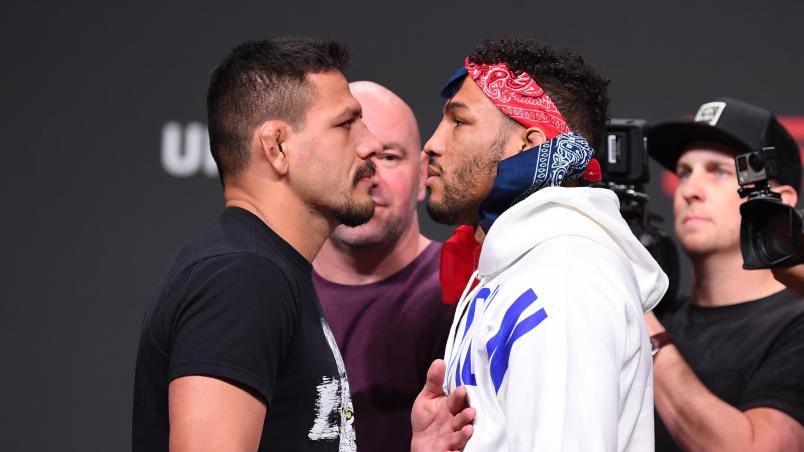 “I took a look around at the division and my main thing after my last performance was to just go out there and fight again,” said Lee, believes he hasn’t fought to his full potential in recent outings. “So when they approached me with this fight with Dos Anjos, who I know is going to show up and show up prepared and is going to give me a great fight, that excited me.

“Dos Anjos is ranked in the Top 5 at welterweight and when I look at that division and what Kamaru Usman did to Tyron Woodley — he might not have the name recognition that somebody like Khabib (Nurmagomedov) has, but when you look at his skills, he’s a little bit more well rounded, a little bit bigger and he presents a bigger challenge to me,” continued Lee, who has never been shy about looking one or two steps down the road and using those potential matchups as motivation. “Switching gears and going after somebody like that adds fuel to the fire, but we’ll talk about the future after this because Dos Anjos is getting my full attention.”

In many ways, Saturday night’s main event pairing with Dos Anjos at Blue Cross Arena in Rochester is the start of a new chapter in Lee’s UFC career.

Chapter One began and ended with losses to Iaquinta, but featured a great deal of growth and development; the ebbs and flows of a career competing at the highest level and flashes of brilliance that give you reason to believe the best is yet to come.

Chapter Two begins on Saturday and Lee is looking forward to crafting the kind of performance he’s longed to deliver inside the Octagon, collecting a big win and giving himself plenty of options to consider in the second half of the year.

“One of the things that excite me about this weekend is to go out there and try my best to out-perform myself and make myself proud,” he said. “I just want to go back to being me and having fun out there. I’m expecting a great fight.

“He’s going to come forward, he’s going to stay in my face, which is going to play right into my game because that’s my natural fighting style. We’re going to get into each other’s faces. I think it’s going to be a blood bath.

“We’ll talk about the future after this,” he added. “Dos Anjos is getting my full attention and (when I’m done), we’ll see what else is out there because there are a bunch of great fights out there to be had.”