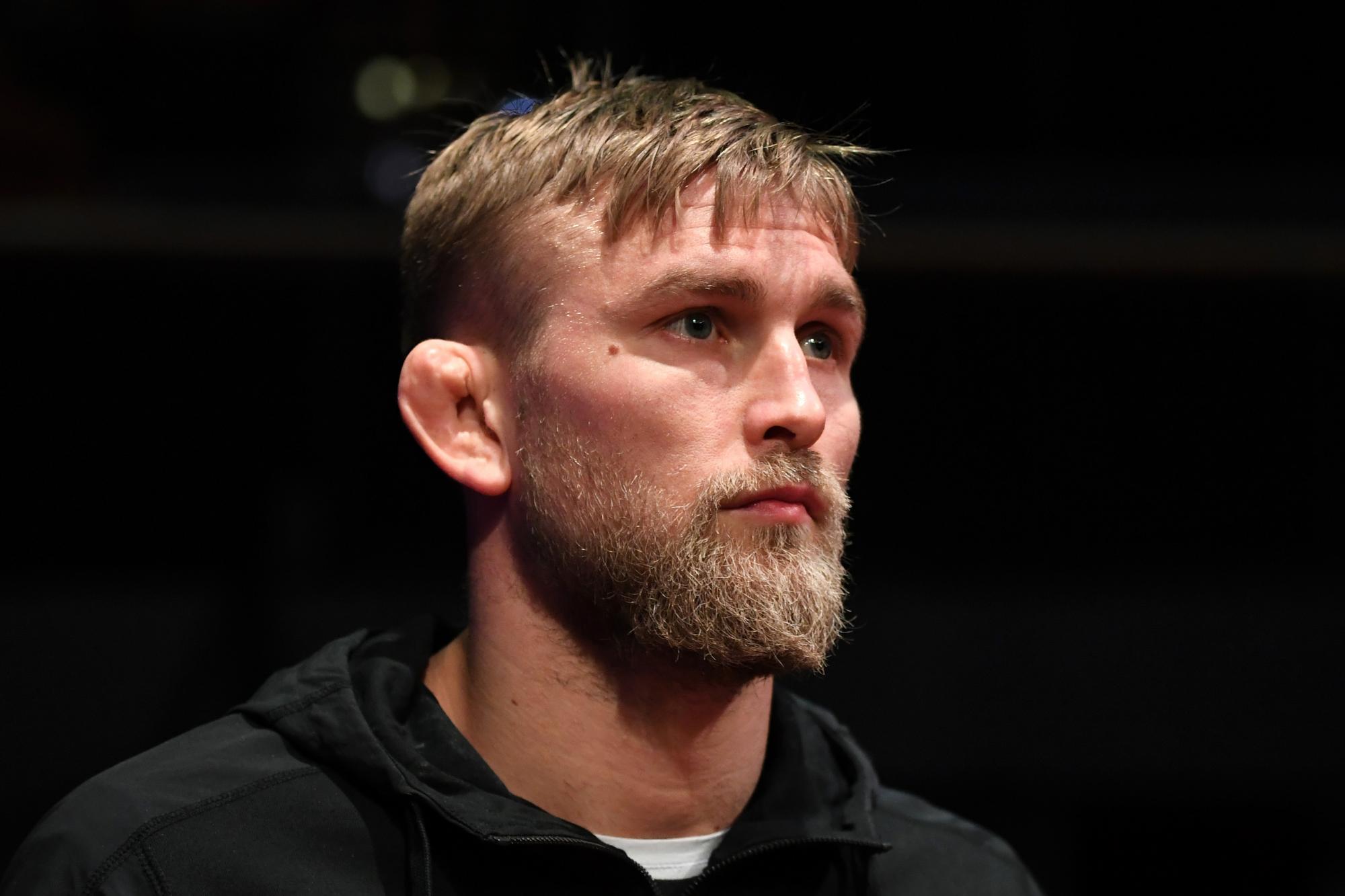 Prior to that evening, the Swedish light heavyweight was viewed as an emerging talent in the 205-pound ranks — a talented fighter, for sure, but also the next contender to be sacrificed to reigning champion Jon Jones. Despite entering on a six-fight winning streak and literally measuring up quite well against Jones, Gustafsson entered as a considerable underdog and many expected he would be dispatched with relative ease.

But then he went out and gave Jones his toughest test up until that point, becoming the first man to take him down and forcing the champion to dig deep over the final six minutes of the contest in order to secure another successful defense of his light heavyweight title. Gustafsson became a made man in the eyes of fans and critics who had dismissed him right up until fight night, and nearly every conversation and interview that came after that fateful night at UFC 165 roped in Jones, the title, and a potential rematch.

Suddenly his next steps had to be mapped out and strategic, designed to propel him into another championship fight.

Two years after losing to Jones, Gustafsson engaged in another exhilarating title fight, this time opposite Daniel Cormier at UFC 192 in Houston. While the opponent changed, the ultimate outcome did not, as Gustafsson once again came up just short in his bid to claim championship gold. Two more fights against two more top-ranked opponents followed and produced two more wins, resulting in Gustafsson getting a second chance to try and wrest the light heavyweight title away from Jones.

Five years, three months, and eight days after his professional life changed in Toronto, it changed again in Inglewood, California.

After years of conversations, missed opportunities, innumerable questions and surely some sleepless nights, Gustafsson and Jones ran it back in the main event of UFC 232 at The Forum, and this time, it wasn’t that close.

“It’s behind me now. It’s in the past,” Gustafsson said of his long awaited rematch with Jones, one that ended with the champion securing a third-round stoppage win. “I got over it kind of quickly. I came up short again (laughs), but life moves on and your career moves on and there are different fights, new fights to take.”

This weekend, the next phase of Alexander Gustafsson’s professional career begins with a headlining assignment against Anthony Smith, himself a recently dispatched title hopeful, in a main event pairing at Ericsson Globe in Stockholm.

While it’s the beginning of a new post-Jones chapter, it’s also a return to a previous point in his career — the days when the who and where of each fight didn’t matter as much as simply being able to step into the cage and compete.

“The last couple years have been focused on the title fight and my position (in the division),” said Gustafsson. “It’s just been title fights or fighting contenders, the top guys. All people have been talking about is, ‘When is your next fight? When are you fighting for the belt?’ and it’s gotten to be too much focus on that. So I’m a bit tired of it and I’ve stepped back a little bit.

“I don’t care anymore who it is, as long as I’m fighting,” added the 32-year-old, who has been limited to just six appearances since his first encounter with Jones thanks to a combination of injuries, timing and always trying to take the fight that made the most sense career-wise. “I want to go back to where I started when you didn’t care about who you’re fighting, where you’re fighting, this and that.

“I just want to take it one fight at a time, stack up the wins and see where it goes. Let’s see what the future brings.”

This weekend brings a major test in the form of Smith, a battle-hardened 30-year-old with 45 fights under his belt who rocketed up the rankings with three stoppage wins in four months last year to establish himself as a new threat in the light heavyweight division.

After Jones did away with Gustafsson in December, he opted to make a hasty return to the cage and it was Smith who was tabbed to face him in the main event at UFC 235 in March, where he was largely unable to pull the trigger and ultimately landed on the wrong side of a lopsided decision.

“It’s been too long between fights so, for me, I just want to stack up fights, stack up wins and get back at it,” reiterated Gustafsson as the conversation shifted to this weekend’s meeting with Smith. “I’m not in a hurry, I’m not stressed — just take it one fight at a time and do my best to win every fight. I actually wanted to fight much earlier than this, but I got this fight and I’m very excited for it. I can’t wait to fight Anthony Smith. I know he’s wanted to fight me for a long time.

“I see me beating him in every distance, in every situation,” he continued, offering his general assessment of how this weekend’s main event will play out. “He’s a very dangerous guy and he comes with a lot of power. He comes hard and fast with his attacks, but I’ve seen a couple of his fights and he gets tired after a couple rounds. In the third, fourth round, he gets a little sloppy and tired, so I’m going to outwork him, basically.

“He’s a great fighter and tough fighter — he brings a lot of power to the table, so I have to be ready, stick to my game and work what I’m supposed to do.” 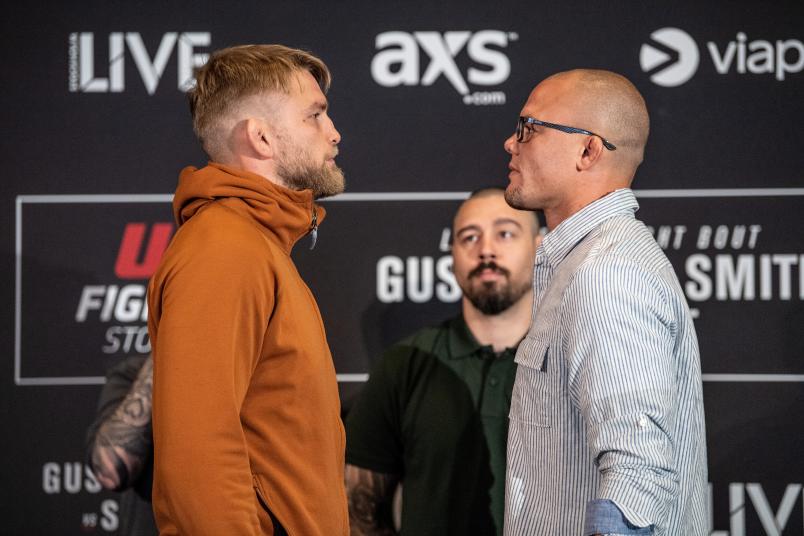 STOCKHOLM, SWEDEN - MAY 30: (L-R) Alexander Gustafsson of Sweden and Anthony Smith pose for the media during the UFC Fight Night Ultimate Media Day at Ericsson Globe Arena on May 30, 2019 in Stockholm, Sweden. (Photo by Jeff Bottari/Zuffa LLC/Zuffa LLC vi

It’s fitting that this next stage of Gustafsson’s career is taking place at home in Stockholm, because as much as his first encounter with Jones at UFC 165 was the night his professional career changed dramatically for the first time, it was inside the same arena where he’ll compete this weekend that everything really started trending in that direction.

Positioned opposite Thiago Silva in the main event of the first UFC fight card in the Scandinavian nation, Gustafsson walked to the Octagon amidst a raucous ovation before outworking the dangerous Brazilian.

This weekend, seven years and a handful of weeks later, he’ll look to do the same against Smith and there is no place he would rather do it than at home at the Ericsson Globe.

“It means a lot. It means everything to me in my career,” Gustafsson said of competing in Stockholm, where he’ll fight alongside several teammates this weekend. “This is by far the best arena and I love this arena — you hear the crowd, they surround you and it’s a great arena to compete in. I get good vibes from it and being home and having my friends and family here is great.

“It’s always a highlight of my career to fight in my hometown and fighting a great fighter, a good guy who comes to fight; it’s going to be very entertaining. It’s a perfect matchup and a good challenge for me here in Stockholm.”