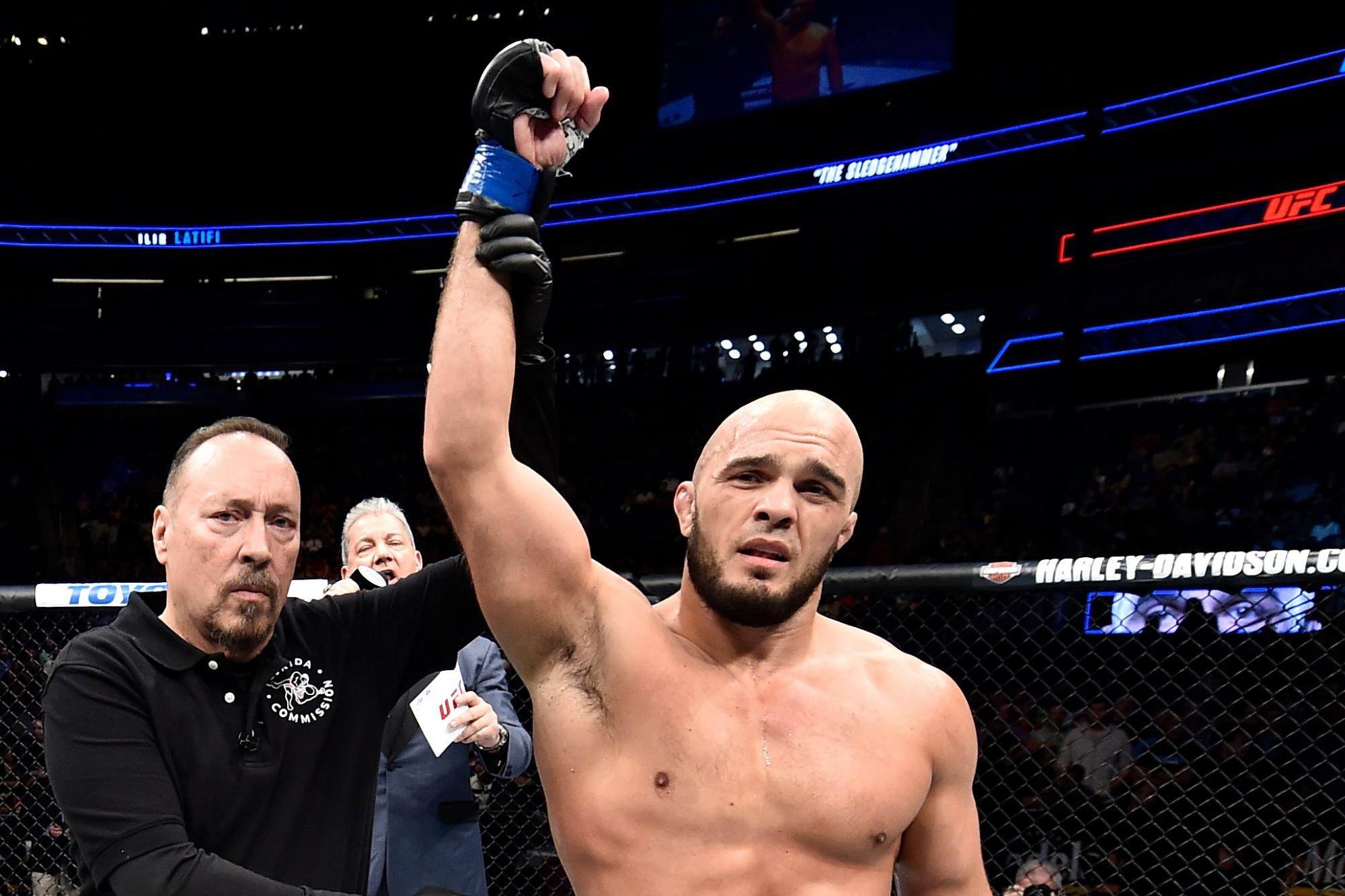 Throughout his UFC career, Ilir Latifi has enjoyed the highest of highs and suffered through the lowest of lows, but no one fight is going to define his career.

Obviously that attitude might change if Latifi achieves his ultimate goal to one day become UFC light heavyweight champion, but he also understands that a single loss won’t deter him from chasing the gold belt he hopes to see around his waist in the future.

In this particular instance, Latifi is getting ready to face former title challenger Volkan Oezdemir this weekend after suffering a setback in his last fight when he fell by unanimous decision to fellow light heavyweight contender Corey Anderson.

The loss stopped Latifi’s two-fight win streak and also stunted his momentum to get into title contention at 205 pounds. Still, as much as he wanted to win, Latifi refuses to allow that one loss to force him to believe it’s time to reinvent the wheel when it comes to his career.

“Honestly it was just a bad day at the office for me,” Latifi said about the loss to Anderson. “Things didn’t go as planned. When the fight day came, I didn’t feel so good but these things happen. But you can never foresee that. It was a tough fight.

“I knew what I was preparing for but I feel the outcome could have been much, much different.”

As soon as the fight was finished, Latifi went back to the drawing board and began preparing for his next opportunity, which comes this weekend as he has the opportunity to perform at home in Sweden for the first time since 2014.

Both Latifi and Oezdemir are coming off losses, which certainly serves as motivation heading into the co-main event slot on Saturday.

In Oezdemir’s case, the former light heavyweight title challenger came storming into the UFC with three straight wins — including two brutal first round knockouts — before facing Daniel Cormier with gold on the line.

He came up short that night and then fell in his next two bouts as well, which means Oezdemir will step into the Octagon against Latifi in the unenviable position of searching for a win off three consecutive defeats.

No fighter wants to lose one fight, much less three in a row, so Latifi knows that Oezdemir will do anything and everything possible to get back on track when they clash this weekend.

“It’s always dangerous fighting somebody who comes from a loss and wants to make a statement,” Latifi said. “He wants to prove himself. Every time you step in you have to be prepared and aware that you’re fighting a hungry opponent.

“My mentality, whoever I fight, I know they are there to fight. I don’t underestimate them.”

As much as Oezdemir’s record reveals three losses in a row, Latifi doesn’t believe that he’s somehow been exposed and the Swiss knockout artist is suddenly just cannon fodder for the light heavyweight division’s elite fighters.

Instead, Latifi sees a top ranked competitor who suffered setbacks against the 205-pound champion, the most recent title challenger in Anthony Smith and then dropped a controversial split decision against rising star Dominick Reyes that he doesn’t really consider a blemish on Oezdemir’s record.

“Volkan, he’s a very tough opponent. Maybe people see his three losses now but you’ve got to look at who he lost to,” Latifi said. “He lost to the champ [Daniel Cormier]. His last fight, I didn’t think he lost that fight.

“I think he won that fight. He’s a tough opponent. He’s a contender. He had a rough time and I think he’s coming into this fight hungry, too.”

Seeing Oezdemir as a massive threat to his campaign to get back into title contention, Latifi won’t look past this fight, and instead sees it as an opportunity to show what he’s learned since suffering a loss in his last outing.

Latifi knows that Oezdemir is going to bring the fight to him and it’s his job to negate his opponent’s biggest weapons and then counter with his own offensive firepower.

“He’s been working on his whole game,” Latifi said of Oezdemir. “Of course, when you get a couple of knockouts in the first minute, you get used to that. Of course, it’s always dangerous as a fighter. You see that a lot when fighters are used to winning in the first round.

Sometimes it can work against fighters. I think with experience, Volkan is a dangerous fighter in every round. We saw that in his last fight.

“I think I have a more well-rounded game. The experience being there, I’ve won fights on the ground, too. I can win in the first round but I can also win in the third. I’m willing to go anywhere to win the fight.”

If winning wasn’t enough motivation, Latifi really wants to put on a show in front of the Swedish audience on Saturday.

The chance to fight at home doesn’t come along every day, and the five-year gap between fights in Sweden has made Latifi appreciate this co-main event slot that much more.

“It’s always special to fight at home, where you started. To be able to bring the show to your home crowd, your family and friends, it’s nice,” Latifi said. “I’ve been around now for a while and doing my best, so it’s nice to get that appreciation and being able to fight as a co-main event.

“Every time you fight, you have pressure. You just embrace it. It’s nice fighting at home. I don’t have a problem with that.”

As far as his title aspirations, Latifi isn’t letting go of that either, and he hopes to begin rebuilding towards an eventual shot at gold, starting with a win against Oezdemir on Saturday.

“The aim is one fight at a time,” Latifi said. “Of course, you want to be up there for the title fight. I still have that goal in the game.”