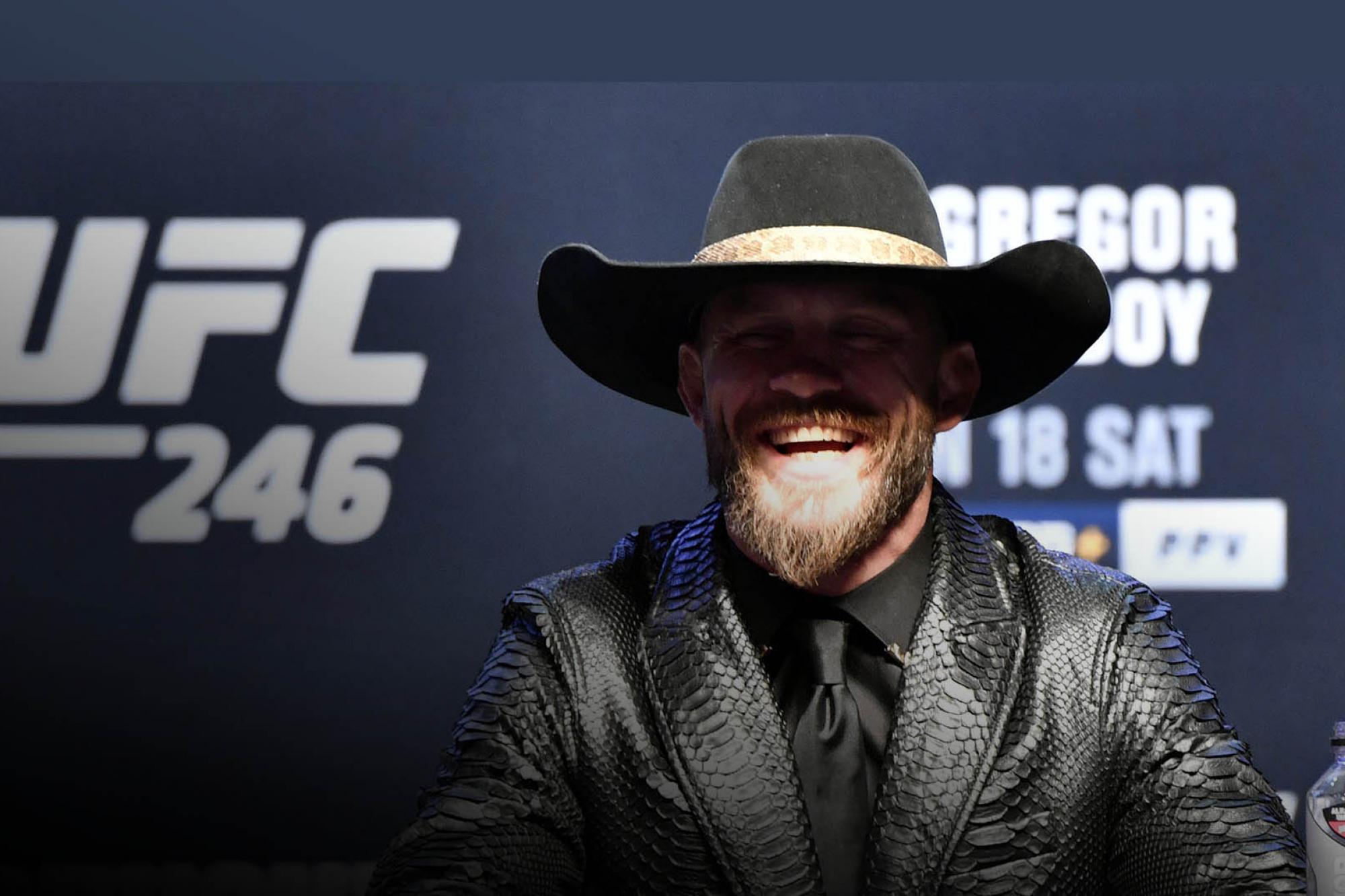 “The really cool thing that kinda struck me two fights ago is hearing all the other fighters saying that if they can have a career and longevity in the sport, something like Cowboy’s done, for me, that was really cool to hear these guys say that."
By Thomas Gerbasi, on Twitter: @TGerbasi • Jan. 16, 2020

Want to know what Donald “Cowboy” Cerrone has achieved in the sport of mixed martial arts? It’s not the numbers for most wins, finishes and bonuses in UFC history, though those are impressive. It’s the fact that even his opponent in the main event of UFC 246 - notorious trash talker Conor McGregor – can’t find something bad to say about him.

And don’t think that doesn’t mean something to the 36-year-old Cerrone, who has been hearing a lot of good things about himself from his peers over the last couple years.

Order UFC 246 For Any Device

“The really cool thing that kinda struck me two fights ago is hearing all the other fighters saying that if they can have a career and longevity in the sport, something like Cowboy’s done, for me, that was really cool to hear these guys say that,” said the Colorado native, who will fight for the 51st time as a professional MMA fighter at T-Mobile Arena in Las Vegas, in the process looking to add to those aforementioned records that have all but guaranteed him a spot in the UFC Hall of Fame when his career is over.

“I think it’s due to me being the dinosaur, me putting my boots on still,” said Cerrone of the all-time marks he’s compiled, but just sticking around doesn’t produce such records and he knows it. It comes with skill, determination, hard work and a willingness to fight anyone at anytime. It also can’t be done without treating this as the most important job in the world.

“This is my life,” he said. “This is the most serious thing.”

Those are words Cerrone doesn’t say often, as he’s usually too busy having a good time playing daredevil when the gloves are off, but again, no one makes it to this level and stays here for this long without complete dedication to the craft. Sure, some can get lucky a few times, but they can’t muster 23 UFC wins by winging it.

So the respect shown by McGregor and his fellow UFC fighters is understandable, and it’s made them happy to see Cerrone get the platform and paycheck he’s getting this weekend.

Just don’t call him the underdog, the fighter McGregor beats on his way to even bigger fights in the coming year. You say that and this “Cowboy” gets a little ornery.

He also knows that he’s not done, that a recent two-fight losing streak is just a bump in the road in a career where he’s weathered more than a few of those. On Saturday, he expects to get into a fist fight, and he loves a fist fight.

Show your support for Cowboy at UFC Store

“Conor’s got a great left hand, he’s a real pressure fighter, and this is gonna be a real drag out good time,” smiled Cerrone. “It’s the fight that everyone wants to see. I’m coming hard. I’m gonna meet him in the middle and we’re gonna throw down.”

And when the dust settles, Cerrone will pick up his son Dacson, kiss his lady Lindsay, and wait for the next phone call.

“Until (UFC President) Dana (White) and them call me and say, ‘No more,’ I’m gonna keep runnin’ and gunnin’.”

For more information and updates, sign up for the UFC Newsletter here.