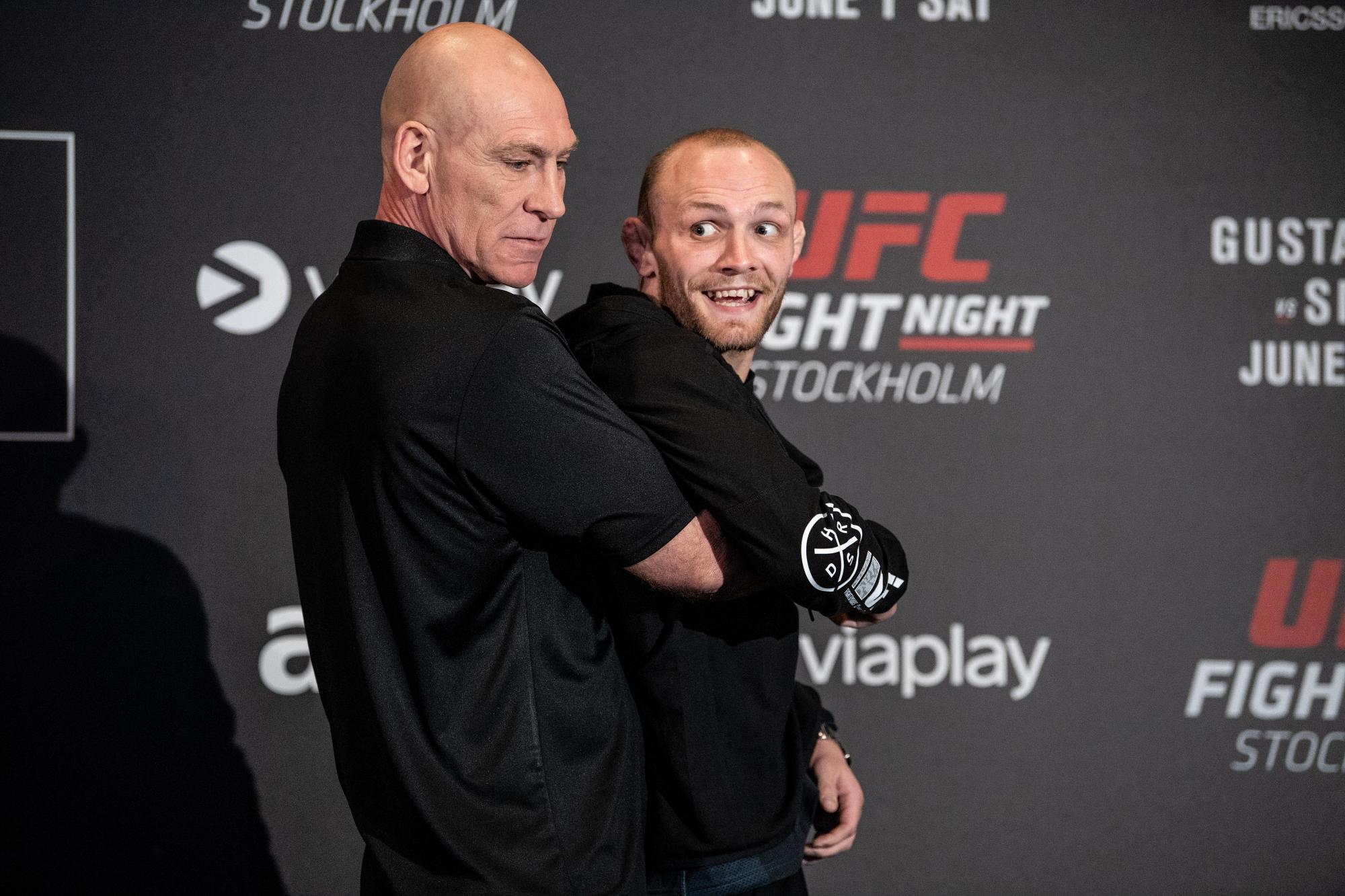 Chris Fishgold Is Blocking The Drama

Despite some pre-fight scuffling, Chris Fishgold is in a good mood and eager to get into the cage in Stockholm.
By Steve Latrell • May. 31, 2019

Shoving and skirmishes at fighter face-offs are far from unusual. The tension is mounting ahead of their bouts. They’re often hungry and grouchy from cutting weight. Slights, either real or perceived, may have been uttered. The symptoms are such a perfect storm that it would almost be stranger if these skirmishes never happened.

Still, it didn’t make the apparent beef between Makwan Amirkhani and Chris Fishgold any less unexpected. Sure, “Mr. Finland” has always had a bit of showman in him, a trait that keeps him popular despite extended stretches between fights. But if there’s one thing Fishgold is known for outside the Octagon, it’s his amiable, humble personality; an everyman that exudes cheer and gratitude everywhere he goes.

Case in point: Fishgold’s last opponent, Daniel Teymur, is also on the Stockholm card, and it’s been nothing but pleasant between the two camps in the host hotel.

“Daniel was cool! His team was cool.” he confirms. “I like Daniel a lot. It’s just business at the end of the day.”

And yet, there it was at UFC Stockholm’s Ultimate Media Day: with a few terse words and a shove, Fishgold vs Amirkhani rocketed to the top of the must-see list for Saturday’s card.

It was a tipping point that had apparently been brewing for weeks, and while Fishgold seems as surprised as anyone, he’s not about to let Amirkhani test his patience.

“I seen him yesterday, he walked past me and said ‘You're gonna feel these [fists] on Saturday, Fishgold!’ He said a lot of stuff too coming up to the fight on social media. Straight away, I just blocked him. It’s business for me, I’m not getting emotionally attached to it like all his other opponents. I walked up to him when he was saying that and I put my hand on his shoulder and said 'Saturday night it's only me and you in there. Remember that. I'm gonna make you eat them words'"

Fishgold utters the words matter-of-factly and without drama, a clear signal his opponent’s boasting mind games aren’t effective on the proud Liverpudlian.

UFC: Drama aside, how do you see the fight itself going?

CF: He hasn’t fought in a year, he’s probably going to have them UFC jitters again, that cage rust. He’ll probably come out flying at me for a round. And he is a big fighter. If you look at all my fights, I fly out at them, and I don’t think he’s had someone fly out. So I think we’ll both fly out, meet in the middle, probably have a little exchange. He’ll probably try and body-lock me and take me down. Bored to death, like he does with all his other fights; bores the life out of people. And I’ll probably submit him. My striking is really good, I’ll throw heavy and I can take a shot. And I’m a black belt on the ground. I’ll go wherever he wants to go.

UFC: You mentioned you were super nervous making the walk at your last fight in Prague. I was surprised only because you’re a former Cage Warriors champion. Why were you so nervous?

CF: You know, the UFC is the premiership of fighting. It’s the best of the best. I’ve spent my whole life trying to get here. I’m finally here. I lost my debut. If I would have lost that one too, that phone can stop calling. It’s out of your hands. So for me to be given my dream and the possibility of it getting took away…

It wasn’t so much for the fight. I’m not really bothered about fighting. Fear is necessary, it keeps you sharp. But I never let it get the better of me. But the thought of maybe getting cut from the UFC…I was in the changing room and I wasn’t even thinking about the fight, I was thinking about that.

UFC: You were considering joining the army just before the UFC called. How has the last year been for you?

CF: I’ve been living a lot nicer, let’s put it that way. I’m still in the same place I was in Liverpool with my girlfriend, Danielle and my two dogs. It’s nice and relaxed. I’ve got a nice life. It’s been nice that people recognize you a lot more. I had a lot of stuff in my personal life that was holding me back for so long. I’ve been a pro since I was 17; its going on 10 years now. I’ve had ups and downs and I was my own worst enemy for a long time. That’s all gone now. I really do love my life at the moment.

UFC: This is a relatively fast turnaround for you. Is this a pace you want, or was this fight just the right opportunity?

UFC: Michael Bisping is going into the UFC Hall of Fame this year, and he sort of embodies British MMA. Do you ever allow yourself to dream that we’ll be mentioning Chris Fishgold in the same breath one day?

CF: It’s crazy. I grew up watching Dan Hardy and Brad Pickett and Bisping. It seems surreal that I’m actually here. I’m in a UFC shirt getting interviewed by you. I dreamt of this since I was 13 or 14 years old. I’m on the main card one fight behind Jimi Manuwa. It’s crazy. It’s like a dream come true. Yeah. I’m living the dream. I’m grateful for every aspect of my life at the moment and all the opportunities I’ve been given. I just want to cherish them and make the most of them.